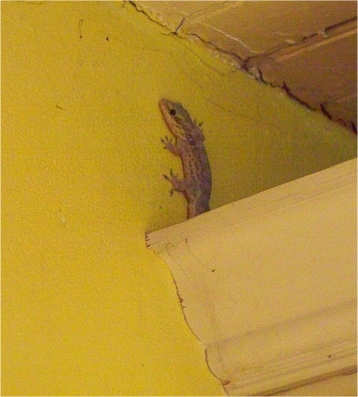 The Cochran’s croaking gecko (Aristelliger cochranae), also known as Navassa gecko, was first described in 1931 by Chapman Grant and named after notable herpetologist and artist Doris Mable Cochran. The species received its common name from the loud croaking call of the males during the mating period. It has a snout to vent length up to 63 mm in males and 53 mm in females.
It has relatively short and massive legs. The colour of its body varies from beige brown to chestnut red and the back exhibits light spots. A dark chestnut crossband traverses from the snout to the head, the nape, and the eyes. The largest part of the tail is dark grey to black.
The hatchlings have clear white crossbands on the tail. It is also a close relative to Aristelliger praesignis, the Jamaican “croaking lizard,” which often finds its way into Jamaican households, much to the dismay of the inhabitants. Many Jamaicans fear this gecko because of its speed and ability to stick to walls, but especially because of the croaking sound it makes while they are trying to sleep

TIPS TO KEEP LIZARDS OUT